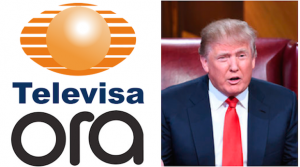 Televisa won’t be airing the Miss Universe pageant and will be breaking all ties with the real estate mogul, who called Mexicans criminals, drug dealers and rapists.

“Mr. Trump hasn’t demonstrated understanding or respect towards Mexican migrants and has offended the entire Mexican population,” Televisa said in a statement. “Televisa isn’t indifferent to these declarations and energetically condemns all forms of discrimination, racism and xenophobia.”

As a result, Televisa determined “It is unacceptable for Grupo Televisa to have any kind of business relationship with Miss Universe and the companies that form the Trump organization.”

Slim’s OraTV, a U.S.-based television production studio and on-demand digital TV network, cancelled a reality TV project it was working on with the Trump family last week, but Arturo Elías Ayub, his son-in-law and Chairman of OraTV, revealed the break on Monday.

“We think it’s incredible that someone can think like this in the 21st century and have this racist position,” Elías told The Financial Times.”His statement was totally out of line…working with someone so closed-minded was not going to work,” he told Reuters.

Televisa and OraTV join Univision and NBC in severing ties with Trump over the derogatory comments.