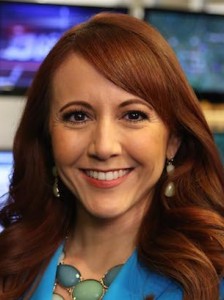 Karla, who is forecasting on weekend evenings, in addition to producing and substituting on weekdays, started on air on June 13th.

“El Paso is home, so I knew that I would only leave for a terrific opportunity in a great city…and I found it! I am so grateful to be working with and for so many kind, talented people that take pride in their work day in and day out at KTNV,” Karla tells Media Moves.

Before taking the job in Las Vegas, Karla spent 15 years at KVIA in a variety of roles, starting as an administrative assistant while in college. After a brief stint at ABC Affiliate Relations in Los Angeles, she returned to KVIA, where she was Program Director and Community Relations Director for several years.

Karla went back to school and completed the Mississippi State Broadcast Meteorology program in 2011, changing her title from weathercaster to meteorologist.

Karla was born in San Luis Potosí, Mexico, and moved to El Paso where she was raised since she was 3 years old.