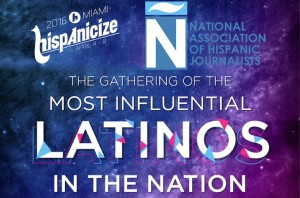 The National Association of Hispanic Journalists (NAHJ) will be launching its first annual Spanish-language conference in 2016 and it will do it in conjunction with Hispanicize at its yearly event.

A week-long track of NAHJ-produced Spanish-language journalism panels will be held within Hispanicize 2016, scheduled for April 4-8 in Miami. The 2016 Hispanic Journalist Showcase will also host English-language sessions on media entrepreneurship and social media in the newsroom.

NAHJ was initially reluctant to partner with Hispanicize, but after participating in a joint survey about the State of Hispanic Journalists two years in a row, and having the Miami NAHJ chapter involved in producing sessions for the Hispanic Journalists Showcase this year, the organization had a change of heart.

“We had a great response from our members to NAHJ’s expanded role in programming at the Hispanicize event this year,” says NAHJ president Mekahlo Medina. “We think it’s going to be a great benefit for our regional members.”

Mekahlo points out that only about 9% of the journalists that attend the NAHJ annual national conference work in Spanish-language media, “because we don’t have enough Spanish-language programming.”

“We’re testing it out the first year within Hispanicize,” he says. “But we’ll continue to do it from now on, regardless of whether it’s with Hispanicize or not.”

As part of its incentive to attract journalists this year, Hispanicize offered 400 free, full access passes for working journalists to attend the event this year. But that won’t be the case in 2016.

Although they’re still working out the revenue sharing details, NAHJ will be getting a percentage of the registration fees from journalists that attend the conference.

Hispanicize, which will mark its 7th year in 2016, is billing itself as “the gathering of the most influential Latinos in the nation.”

The deadline for proposing panelists and submitting session ideas is October 1, 2015.