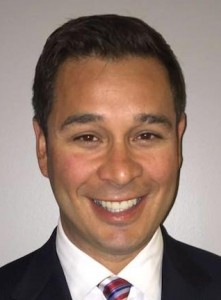 “I’m thrilled to let all of you know I will be staying in Chicago! This is my home and I’m so grateful I will continue my career here,” he shared on his Facebook page.

Rob starts the new job 4 months after leaving NBC-owned WMAQ-Channel 5, where he worked for the past 13 years.

He opted not to renew his contract at WMAQ in order to pursue new opportunities, calling it “the most difficult career decision of my life,” Chicago media writer Robert Feder reported in March.

Rob joined WMAQ in 2002 as a reporter, moving up to weekend morning anchor and later to weekday morning anchor. He was promoted to 4:30 pm weekday anchor in February of 2012, also reporting for the 10 pm newscast.

Rob previously worked for ABC7 in El Paso from 1998 to 2002, starting as a weekend anchor before co-anchoring the morning show.

He began his broadcasting career as a photographer for WICD-TV in Champaign-Urbana.