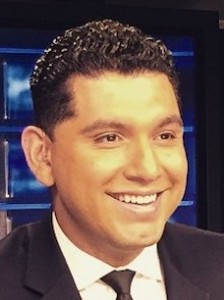 Nick Valencia is staying with CNN for another two years. His new contract includes a title change from reporter/producer to correspondent. He’ll continue to be based in Atlanta.

Nick has always been very vocal about how excited he is to have been able to fulfill his dream of being a correspondent and grateful of the opportunity to grown within CNN.

He joined the cable network in March of 2006 as a teleprompter operator, later taking on the roles of associate producer for CNNI’s “Inside Africa,” and national and international desk editor.

He was promoted to national news reporter in 2013.

About his past 9 years at cable news network, Nick recently said: “The top brass at CNN saw something in me and gave me a chance to prove myself. It’s worked out for the both of us.”

Nick has been getting significant air time this year, covering top news stories, such as the Baltimore riots, the Charleston church shooting and the escape of Mexican drug lord El Chapo from prison.