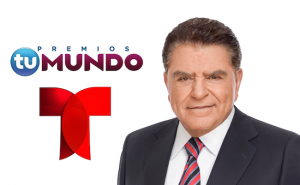 In an interesting turn of events, Telemundo today announced it will honor Mario Kreutzberger, better known as Don Francisco, for his lifelong contributions to Spanish-language television during its live broadcast of this year’s “Premios Tu Mundo.”

The announcement comes just one day after Univision said it would pay tribute to the man who has been the host of “Sábado Gigante” for the past 53 years during a special event at The Paley Center for Media in September.

Univision pulled the plug on “Sábado Gigante” in April of this year. The final episode will air September 19.

That means that despite ongoing commitments with Univision, Don Francisco will be on Telemundo’s air on August 20, during the “Premios Tu Mundo” awards show – something previously unheard of in the Univision-Telemundo universe where on-air talent appearances in the rival networks was prohibited.

Telemundo reps would not comment on whether recognizing such a high-profile Univision personality on their awards show means there may be a future for Don Francisco in the NBCUniversal family when “Sábado Gigante” comes to an  end next month.

“This is about celebrating Don Francisco’s lifelong contribution to Spanish language television and popular culture around the world. No individual in television in any language has had the impact Mario Kreutzberger has had,” Alfredo Richard, SVP of Corporate Communications for NBC’s Hispanic Enterprises and Content, tells Media Moves. “We thank him for his lifelong commitment to our community, not only as Don Francisco, but also as a tremendous humanitarian.”

When Univision announced the cancellation of “Sábado Gigante,” network reps said the 74 year-old would continue to host entertainment specials, participate in the “TeletónUSA,” and help the network look for and develop new on-air talent and professionals, indicating there was still a role for him to play in the network, despite the end of his show.

Don Francisco is the creator and host of the longest running variety show in television history, as certified by the Guinness Book of World Records. He started the show in his native Chile in 1962 and brought it to the U.S., where it has aired on Univision network since 1986 (at the time, Spanish International Network – SIN).

The Univision network and The Paley Center for Media event honoring Mario Kreutzberger will take place Tuesday, September 8, 2015 in New York, during which the host will participate in a Q&A reflecting on his career.  Don Francisco and Univision will also present The Paley Center for Media with a selection of classic episodes for its publicly-accessible Paley Archive collection.