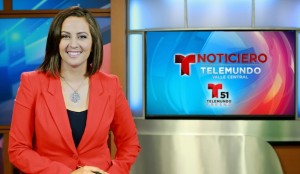 Emmy-award winning journalist Vanessa Ramírez-Ávila has been hired as the newscast’s anchor and executive producer.

The one-hour Spanish-language program will air weekdays from 5:30 to 6:30 pm, reaching audiences in the Fresno, Madera, Tulare and Visalia markets.

In 2013, Telemundo Fresno started airing news at 6 and 11 pm, but it was actually a feed of the San Jose/San Francisco newscast that was soon canceled.

“Noticiero Telemundo Valle Central” will be produced in partnership with Nexstar Broadcasting Group stations KGPE-TV (CBS affiliate) and KSEE-TV (NBC affiliate) in Fresno, as well as Telemundo in Bakersfield, using resources from those outlets.

Vanessa will work out of Nexstar’s Fresno facilities, but will be a Serestar Communications employee, which operates the NBCU-owned Telemundo 51 station since 2014.

Prior to joining Telemundo 51, Vanessa worked as a reporter, producer and back-up news anchor for KFTV Univision 21 in Fresno from 2006 to 2014. She previously worked in her native Mexico as an anchor at Jerez TV (2004-05) and anchor/reporter Televisa Zacatecas (2001-2005).

According to Aaron Scoby, EVP and General Manager, they’re looking at expanding local news to 11 pm.