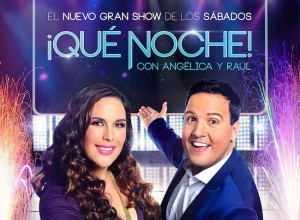 The 2-hour Saturday night variety show, hosted by Angélica Vale and Raúl González, is produced by independent production company IMAGINA US for Telemundo and is taped in front of a studio audience.

Art Izquierdo is the Executive Producer.

Billed as a family show that features special guests, contests, parodies, comedy skits and games, the network seeks to fill the void left by the cancellation of Univision’s long-running “Sábado Gigante” and attract that audience – interested in a variety-style show.

In addition to airing in the U.S. and Puerto Rico, “¡Qué Noche! con Angélica y Raúl” will also broadcast to over 21 countries in Latin America through cable channel Telemundo Internacional, including Mexico, Colombia and Venezuela.