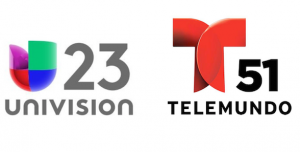 This is the first month in almost a year that Univision 23 secures the lead at 6 pm. Telemundo had that title for the previous 8 consecutive months at 6 pm among adults 18-49.

However, Telemundo’s WSCV 51 remains #1 at 11 pm for the 31st consecutive month, regardless of language – holding on to the spot since people meters were introduced in the market in October 2008.

According to the network, Noticiero Telemundo 51 also outperformed its competitors by having the most-watched local newscasts regardless of language at 5:30 and 6 pm among Adults 25 to 54.

The station, which is celebrating its 30th anniversary, also led the market in Primetime, Monday to Sunday, from 7 PM to 11 PM and Monday to Saturday from 8PM to 11PM, among all three demographic groups (Adults 18 to 34, Adults 18 to 49 and Adults 25 to 54).

Source: NSI Miami-Ft. Lauderdale October  2015 sweeps (October 1, 2015 – October 28, 2015) Live+SD Ratings. Station rankings are based on Ratings to 1 decimal point. All News programs are based on Program Average Ratings airing in the Time periods stated and only on those stations airing those new programs stated. All Primetime/Early Fringe  are based on Time Period Ratings among all 13 broadcast stations in the Miami DMA including: WSCV, WLTV, WFOR, WPLG, WTVJ, WSVN, WBFS, WSFL, WGEN, WFUN, WJAN, WAMI and WSBS