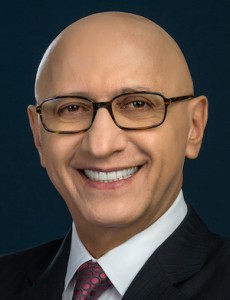 According to an internal Univision memo, Alberto “Beto” Ciurana “has decided to step down from his position as President of Programming and Content to spend more time with his family.”

Sent via email to staff late today and signed by company CEO Randy Falco, the memo says Ciurana will continue to help as a consultant during the transition period until Univision names his successor, indicating that will happen “shortly.”

Ciurana, a longtime Televisa programming executive, has worked twice for Univision – as VP of Production in 1986. He rejoined the company in his current role, overseeing programming for Univision’s broadcast and cable networks in 2012.

Ciurana also sent a tweet about his decision to leave, thanking all his colleagues and the company for allowing him to remain part of the “Univision family.”

In June of last year, Trump named Ciurana in a $500 million lawsuit filed against Univision, claiming Ciurana defamed him by posting on his Instagram account side by side photos of him and South Carolina church-shooter Dylann Roof with a caption that read “no comment.”

In December, Univision lawyers filed a motion to dismiss Trump’s lawsuit against the company and Ciurana, calling it “beyond frivolous.”

Here’s the email sent out to staff with the announcement as well as a pep message:

I wanted to inform you that Alberto (Beto) Ciurana has decided to step down from his position as president of Programming and Content to spend more time with his family. Beto has agreed to be available on a consultancy basis to help us with any transition and/or longer term needs the Company may have.

Please join me in thanking Beto for his many contributions over the past few years and for his passion for our content and our audience. As you know, he has more than 35 years in the industry and this is his second time at Univision; he first worked with the team in 1986, returned to Televisa in various roles, and now has been with us since 2012.

A successor for Beto will be named shortly. In the meantime, I know the entertainment division will continue to deliver the quality content for which we are known. The tremendous work Despierta America, El Gordo y La Flaca, and Sal y Pimienta are doing on the entertainment side in covering El Chapo – in collaboration with our News teams – is just one example that brings to life why we are the best at delivering outstanding coverage, at being nimble and opportunistic, and in providing credible content. Our results speak to the outstanding professionals we have in front of and behind the cameras, and across platforms.

As we look at 2016, this is an important year for us. On the entertainment side, in addition to the award winning content we are delivering on daytime, we have important launches planned in the next few weeks on the Univision Network with El Hotel de los Secretos and Nuestra Belleza Latina, and on UniMás with La Viuda Negra 2 and Lady. We have the best in class special events team working on the upcoming Premio Lo Nuestro in February.

I am confident that we will continue to deliver on our mission and our 2016 goals.

Thank you for your continued commitment to UCI.