Voces, Huffington Post’s Spanish-language portal aimed at U.S. Hispanics, is no more. Launched on May 1, 2012 as a HuffPo rebranded site, previously known as AOL Latino, Voces no longer has a landing page.

Going to the voces.huffingtonpost.com URL redirects the user to the HuffPo’s Latino Voices English-language site. And if you click on the Voces (en español) link on the Latino Voices site, it takes you nowhere. It’s an inactive link.

As one insider told Media Moves, “the website was turned off.”

The last members of the Voces team in the U.S. were laid off last week in a wave of Huffington Post cuts. Among them: Managing Editor Marinés Arroyo, Senior Editor Hirania Luzardo, and Senior Entertainment Editor Mandy Fridmann.

The three women had worked on the site since it was AOL Latino. 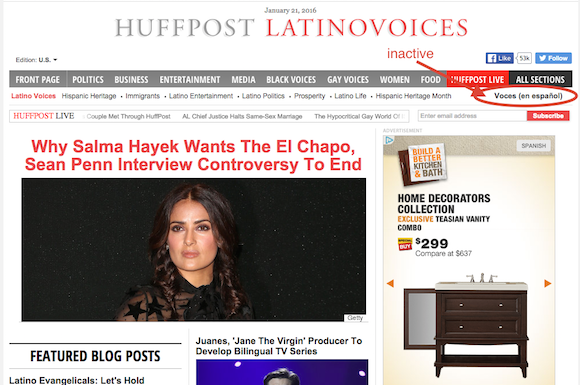 A source says layoffs had been a constant at Voces, almost since its inception. At its peak, there were aproximately 20-25 people working for the online pub. By last week, that number had dwindled to the three U.S. editors and a couple of outsourced contributors/editors based in Mexico.

A request for an explanation as to why Voces was shut down and if any changes were planned for Latino Voices elicited the following one line response from a Huffington Post spokesperson:

“We’ll be transferring HuffPost Voces to HuffPost Mexico, a new edition we’re preparing to launch that will serve our Spanish speaking audience in Latin America.”

Further questions about the issued statement and the fact HuffPo is abandoning Spanish-language content for U.S. audiences went unanswered at the time of this publication.

The statement seems to stray from Arianna Huffington’s Voces 2012 welcome message, which announced “a Spanish-language vertical that will bring the power of HuffPost’s blogging platform to the legacy of AOL Latino,” reflecting “the real experience of Latinos in America,” and revolving around “community and social engagement.”

Update 1/22: After persisting on an answer about the future of HuffPo’s Latino Voices and a request on why Voces was shut down, a company spokesperson sent the following reply:

“There are no changes planned for Latino Voices and we intend to continue reaching our US Latino audience through the section. In addition, we will be launching HuffPost Mexico this year, a new edition that will serve our Spanish speaking audience in Latin America.”

Asked if HuffPost Mexico would take over the Voces URL, the spokesperson said no. Mexico’s site, scheduled to launch in the first half of the year will have a new URL.

The spokesperson would not answer why the company opted for eliminating Spanish-language content for U.S. Hispanic audiences, but said: “We know that Latinos in the U.S. read our entire site, not solely the Latino Voices section. That being said, Latino Voices will continue to be a vibrant part of The Huffington Post.”