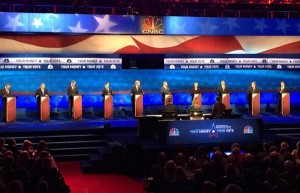 The Republican National Committee has decided to give Telemundo another shot at hosting the presidential debate in Houston next month.

But it’s not giving the same opportunity to the Spanish-language network’s parent organization NBC. Instead, CNN will be producing the debate set for February 25.

Back in October, RNC chairman Reince Priebus pulled the plug on Telemundo and NBC, upset that debate moderators on CNBC, which is also owned by NBC, resorted to “gotcha questions… designed to embarrass our candidates.”

The RNC’s debate committee voted yesterday to award the debate to CNN and to bring Telemundo back in. This decision may be an attempt by the GOP not to alienate Latinos any more than they already have, since their argument is they can’t trust an NBC network to be “fair” after the CNBC fiasco and Telemundo is owned by NBC.