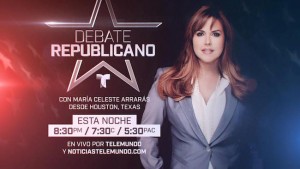 The Telemundo/CNN-produced Republican debate takes place tonight and the network’s local station group will be in full force in Houston.

As one of the hosts of the debate, Telemundo network positioned María Celeste Arrarás to participate as a panelist asking the candidates questions related to Latino issues.

Additionally, a team of anchors and reporters will be at hand to cover the event for several of Telemundo’s local stations.

Since the debate is taking place in its home turf, KTMD Telemundo Houston will have the biggest presence. Co-anchors Martín Berlanga and Paulina Sodi and reporters Ruby Guzmán, Roger Franco, Carlos Depavia, José Santos, Laura Diaz and Juan José Rodas have provided advance coverage and will be at the event.

This is the talent lineup sent from other local Telemundo stations:

Telemundo almost didn’t get to host this debate in Houston. Republican National Committee chairman Reince Priebus had decided to exclude the Spanish-language network in protest of CNBC’s “bad faith” handling of the Republican Debate in October.

The RNC agreed to have Telemundo back as a debate host last month, but it didn’t extend the same invitation to NBC.