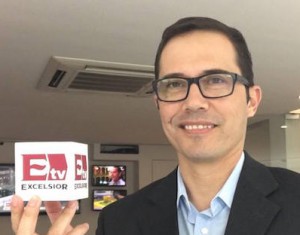 Carlos Tamez, who resigned as Executive Producer for Telemundo Houston in February, has been named Director of Excélsior TV, a Mexican television 24-hour news channel owned by Grupo Imagen Multimedia.

Carlos was hired to run Excélsior TV and help launch a new network expected to debut this summer.

“I am thrilled with this opportunity to grow in my career,” he tells Media Moves. “It’s a historic moment for Mexican TV. Excélsior TV will be strategic for the launching of this third network. We have the best multimedia journalists in the country, with reporters from Mexican newspaper Excélsior which is going to celebrate its 100th Anniversary next year. And we have very exciting plans to deliver a different option to our audience through all our platforms.”

Prior to working for Telemundo, Carlos spent 10 years at KUVN-23, Univision’s O&O in Dallas, working his way up to News Director.