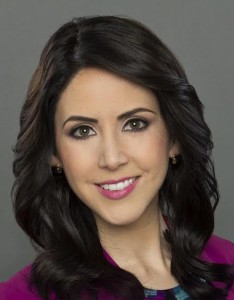 Andrea González has been named 6 and 11 pm co-anchor of Univision’s KMEX-34 in Los Angeles. Her first day on the air is next Monday, May 2.

She’ll be co-anchoring the weekday newscasts with León Krauze and work on special assignments.

Andrea replaces Felicidad Aveleyra, who left the station in September of last year to join Telemundo as a network anchor/reporter.

Univision brings Andrea from Mexico, where she has been a Mexico City correspondent for the network since 2014. She was previously anchor of TV Azteca Noreste’s morning newscast “INFO 7” in Monterrey from 2009 to 2014.

Andrea has also been a columnist for Semanario INFO 7 and Mexican newspaper El Horizonte.