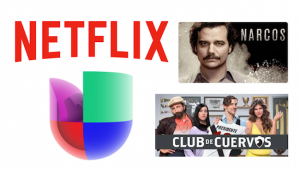 As part of the deal, Netflix will air full seasons of two of its original series – “Narcos” and “Club de Cuervos” on Univision and Unimás.

This marks the first time Netflix partners with a U.S. broadcaster to air its original shows outside its VOD platform.

Univision has yet to announce the date “Narcos” will air on Univision and “Club de Cuervos” on Unimás, but it will be later this year leading up to the global debut of their second seasons on Netflix.

“Narcos” chronicles the story of Pablo Escobar and the law enforcement agents who battled to end to his drug empire in the late 1980’s. Comedy “Club de Cuervos” from Mexican filmmaker Gaz Alazraki (“Nosotros los Nobles”) follows a wealthy family’s power struggle to control of a professional soccer team.

“El Chapo” will first air on UniMás in 2017 and then be available to Netflix members in the U.S. In the rest of the world, episodes of “El Chapo” will premiere exclusively on Netflix.