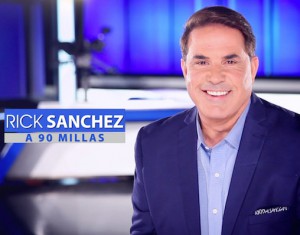 “Rick Sánchez 90 miles” debuts next Monday, May 9. The one-hour show will air Monday through Friday at 4 pm.

The show will invite guests to talk about the day’s topic.

América TeVé is describing the show as a “controversial TV program,” which “denounces citizens, crime, political and other scandals, cases of social violence, white collar crimes.”

Leticia del Monte will be the show’s producer.

Rick, best known for his 6 years as an anchor at CNN, was a contributor for MundoFox based in Miami until the network’s change of ownership and rebranding to MundoMax. He continues to contribute to Fox News.