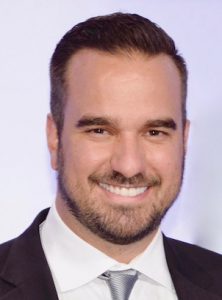 Erasmo steps into the role left vacant when Carlos Rausseo was promoted to main anchor in May.

This is Erasmo’s first U.S. anchoring gig. He arrives to Denver from Meridiano Televisión in Venezuela, where he worked as a sports anchor since 2007.

He was also an anchor and producer for Planeta FM Radio Station in Caracas, producing shows such as SinFlash Radio and Planeta Fútbol Club from 2004 to 2009.