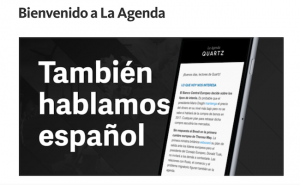 Quartz has hired a freelance writer and editor to produce the Spanish-language newsletter.

According to a Nieman Lab story, Quartz has no specific plans to expand Spanish-language coverage beyond the newsletter launched on October 26.

With the “Daily Brief” currently at 250,000 subscribers, Quartz is attempting to expand its audience of business readers in Latin America.