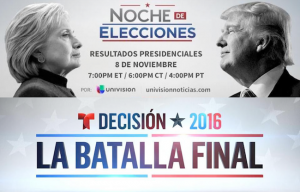 Univision’s coverage reached 10.1 million Total Viewers 2+, who tuned in to all or part of the three-hour live broadcast, according to Nielsen.

Univision also scored big on the network’s digital platforms. It got over four million unique visitors and more than 39 million page views on Tuesday night making Univision the No. 1 Spanish-language digital destination. Univision Noticias and Univision Política’s Facebook pages achieved an increase of 640% and 800%, respectively, in post engagement on Tuesday night in comparison to the previous day.

Univision’s Facebook Live was also one of the top three most viewed in the U.S. regardless of language drawing in 14.5 million video views.

Telemundo primetime election coverage from 7 to 11 pm was no match for Univision. Although it did very well for the night, Telemundo reached 5.3 million total viewers who tuned in to all or part of 8 to 11 pm live broadcast on election night, compared to Univision’s 10.1 million.

Telemundo has seen significant growth in primetime entertainment over the past year. And on November 8, it also saw an increase in viewers of election night coverage, more than doubling its 7 to 11 pm audience from 2012 election night.

Telemundo’s site, apps and Facebook Live generated over 8.8M views for the livestream of the 2016 election results.