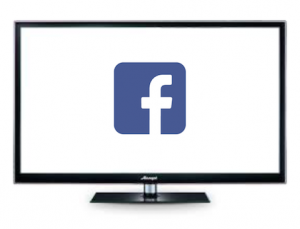 Facebook is coming soon to your big screen television.

The social network announced it is launching a new video app for Apple TV, Amazon Fire and Samsung Smart TV within the next few weeks, as well as upgrades that will mark “new ways to watch Facebook videos.”

This move places Facebook in a very strong position to unseat YouTube, Netflix and dramatically disrupt the network and cable television business.

The Facebook video app will connect your existing social media account and allow you to watch videos shared by friends, pages you follow, top live videos from around the globe and recommend videos based on your interests. You will also be able to watch videos saved for later viewing or replay videos you have watched or uploaded.

The impact for publishers

With a massive distribution platform of 191 million monthly U.S. active users, all major news organizations and networks have a strong presence on Facebook. But while making their content available on the TV app will accelerate Facebook’s dominance in the video landscape, what will it mean for publishers and networks?

Why would I need to turn on a TV channel when I can see the same content within Facebook? Do TV broadcasters limit their use of Facebook video to protect their legacy networks? Or will they embrace this new digital platform at the expense of the traditional broadcast signal? This is a very important turning point in the history of broadcast television and could be the equivalent of what happened to newspapers when the Internet started to impact their print readership.

Facebook also announced it will be testing mid-roll video ads that will appear on videos longer than 90 seconds. The company is also beta testing a video only button inside their app that will surface top trending video, subscribed video channels and a search bar. The video platform will mimic many of the popular features found inside services such as YouTube and Netflix.

In the coming weeks, Facebook will also implement automatic sound on all videos played on their mobile and desktop apps.  You will also be able to minimize the video and continue scrolling your Facebook news feed.

The company recently tweaked its news feed algorithms to prioritize longer form video with higher completed view rates. This means that if publishers are only uploading short, bite size video, their content will see a decrease in their reach.