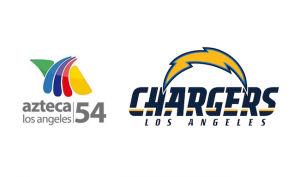 The Los Angeles Chargers have agreed to a multi-year television agreement with KAZA-TV Azteca América 54, making the station its Spanish-language broadcast partner.

Azteca América 54, which first signed on in Los Angeles in 2001, will televise all preseason games available to air in Southern California.

Azteca América 54 will also offer pre and postgame shows for the preseason games, a weekly Chargers series during the season and Chargers news features throughout the year.

The Chargers have also made ABC-TV, iHeartMedia Los Angeles and KFWB 980 AM the team’s official flagship stations and will collaborate extensively with each broadcast partner in developing a wide range of content, including preseason games, exclusive shoulder programming, behind-the-scenes shows, news features, community events and promotions.