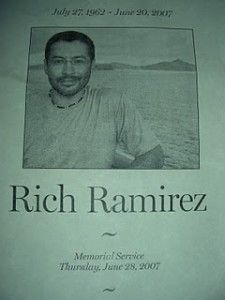 Memories of Rich evoked many tears, but some laughter as well during a service in his honor. The First Unitarian Church in San Jose was crowded, with family, friends and colleagues who came to share feelings, thoughts and anecdotes about the raging USC fan. There were many people who flew in just to say a final good-bye to Rich.

Karl Kahler, a fellow USC grad and longtime Mercury News colleague led the memorial service. Rich’s brother-in-law, George Dalke and his high school friend Steve Norvell were the first to speak. Among those who spoke were two of Rich’s former bosses – Jerry Ceppos and David Yarnold, who flew in from New York. They shared some heart-warming stories of Rich, which gave us another glimpse of what a wonderful man he was.

Other out of towners who came to pay their respects: from Chicago, Bryan Monroe, former Mercury News and Knight Ridder executive and current NABJ president and from Los Angeles, Cecilia Alvear, former NAHJ president and ex-NBC network producer. Noticeably absent: Susan Goldberg, who until a month ago was his boss.

Throughout the service he was remembered as a dedicated employee who truly loved his job and as a generous and warm soul. For those of us who didn’t know him outside of work, we learned about his saxophone playing abilities, his love for travel and his absolute passion for USC, his alma mater.

Mercury News photographer and longtime friend Jim Gensheimer produced an incredibly moving photo slideshow of happy moments in Rich’s life, starting with a picture of him as a baby, his evolution throughout the years, his wedding to Janet, moments with friends, ending with the photo of a laid-back Rich by the ocean… the very same one on the cover of the memorial service program.

The USC fight song played at the end, as a tribute to Rich.

After the service was over, there were many hugs and lingering questions of why Rich is no longer with us. Seeing how so many people were touched by Rich, I wonder… did he know just how much we all appreciated him? I hope he did. If not, this is the time to think about those we love and respect and let them always know how much they mean to us, before it’s too late.