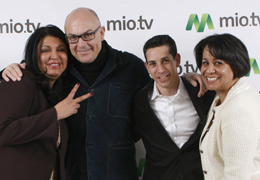 Marketing y Medios reports the interactive site will allow users to access original Mio-produced content and is expected to compete against other major Hispanic-targeted online players, including Batanga, AOL Latino, Univision and YouTube.

A private beta version of the site was unveiled yesterday during a press event, but Mio.TV is scheduled to go live for the public in late March.