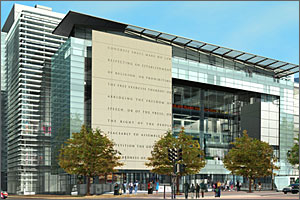 The $450 million dollar high-tech museum dedicated to exhibiting the history of the news industry will open to the public on April 11, six months later than originally planned.

The Newseum is a state-of-the-art building that has 15 theaters, 14 galleries, two broadcast studios, 100 original videos and more than 130 interactive stations that will showcase the history of the media, from the start of printing to the digital age.