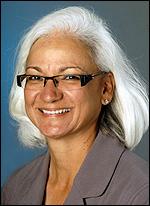 She replaces Executive Editor Ron Kaye, who resigned Friday. In a D.N. article, she says her priorities will be on local news and continuing the newspaper’s watchdog role: “The energy and passion and commitment to the community is not going to change.”

Carolina will be taking over a newspaper that is trying to evolve into a multimedia news source, as newspaper subscribers decline and readers migrate to online news sites. The challenge will be accomplishing those goals with less staff.