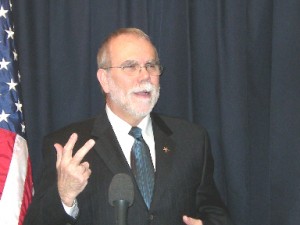 Gil Sanchez, who started a Spanish-language newscast at KSKA in Alaska 17 years ago, is running for the Anchorage school board.

Gil, who also produced and hosted “Intercambios,” an 11-yr old bilingual public affairs show for the same radio station, felt compelled to run because of the lack of diversity on the school board and in the school district, where 50% of the students are minorities.

“If I’m elected, I would be making history,” he says. “Because I would be the first Latino to serve on the board.”

That election is taking place today. “I think I have a 50-50 chance,” says Gil. “A lot of people know me because of the radio show and my advocacy work for the community.”

A lot of the community work he did on the radio is now history. “Unfortunately, KSKA has new managers and they didn’t feel it was appropriate to have Spanish-language programming, so they canceled the shows,” says a disappointed Gil. “Now there is no more Spanish news in all of Anchorage. And that’s a disservice to the Spanish-speaking community,” which he says is about 45,000 strong in the Anchorage city and valley areas.

Gil is currently working on a book about his experiences as a Cuban living in Alaska.