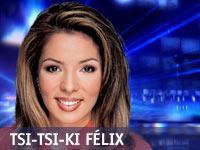 WSNS-44 is expanding its news coverage. Starting next Monday, April 21, the Telemundo station in Chicago will be producing a 10:30 am newscast. Tsi-Tsi-Ki Felix will anchor the show. She will continue her anchor duties at 5 pm.

The new morning newscast will be geared towards women. News director Esteban Creste tells me the show will include news of the day, but will mostly focus on health, personal finance and community service segments. “There will be no sports!” he says.

Esteban, who’s been heading the news department for over 3 years, says he had been trying to get this project off the ground for a while. Telemundo airs paid programming in that time slot.

“I’ve managed to double the news we produce since I arrived,” says Esteban. “I think that’s a pretty good story to tell.”

His news department was not immune to NBC’s 2.0 cuts. Last year, he lost 35% of his newsroom staff, including two reporters.