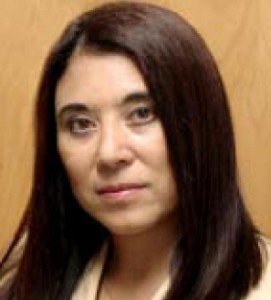 When the rumor first broke that Noticiero Azteca América was moving to Mexico City in mid-March, VP of news María Elena Jáuregui (shown left) vehemently denied it. While she admitted there were changes coming, including some personnel cuts, she insisted that the local and national newscasts would continue to be produced in Los Angeles, with the TV Azteca news department in Mexico City “supplementing” the U.S. programming.

María Elena resigned from her position of V.P. of news last Wednesday. She is now in charge of special projects for Azteca América. Since I spoke with her in March, many of her newsroom employees jumped ship to other stations. But 29 didn’t escape the ax.

An employee of the station confirmed station staffers were laid-off in two rounds – one on Friday and another on Monday. I’m told producers, APs, studio and control room staffers were amongst the casualties.

Reporter Alicia Unger was given a pink slip and Nancy Agosto will no longer anchor. She will stay on as a reporter. Three other reporters, Carlos Zapata, Luis Treto and Claudia Mendoza will remain as part of a bureau set-up, with the U.S. local newscasts produced and anchored in Mexico.

Bottom line: Azteca América will be feeding U.S. Hispanics with a regionalized news service, produced in Mexico. While a few local news crews will remain, it will be interesting to see how producers in Mexico determine what’s important to cover in L.A. on a daily basis.