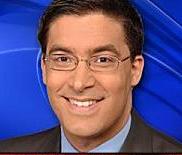 Raoul Martínez, anchor-reporter at WESH-2 in Orlando is leaving the station after six and a half years. He is moving back to California. He doesn’t yet have a job lined up, although he did tell the Orlando Sentinel on Friday: “I’m excited about a new opportunity that’s developing.”

His last day on the air at the Orlando NBC affiliate was Sunday night. Before joining WESH-2 News, Raoul spent two years as anchor and reporter for KESQ in Palm Springs, California.