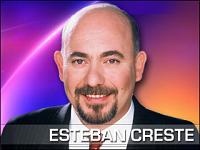 Esteban tells me he’s looking forward to the new job: “It’s a great challenge, which will require team work and clear direction.”

Esteban was recently promoted from news director to VP of News in Chicago, where he has been for the past three and a half years. He previously worked as a reporter and managing editor for Telemundo 47 in NYC.

He replaces Al Corral, who left the station in April, after 7 years.