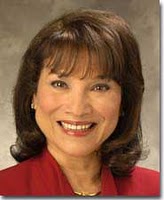 Reporter Lupita Murillo celebrated her 30th anniversary at NBC affiliate KVOA last week. Lupita arrived in Tucson in 1978 after working at KRGV-TV in Weslaco, Texas for several years as reporter and weekend anchor.

She was one of the first Hispanic women to work in Texas television news and faced the challenge of working in a male-dominated environment. She tells the Arizona Daily Star: “I remember one time walking into the break room and the guys were drinking their coffee and smoking their cigars. One of them said, ‘What is this world coming to when we are letting women into the business?’ ”

She says that attitude made her stronger. In an industry where reporters come and go, celebrating 30 years in one station is a true accomplishment.