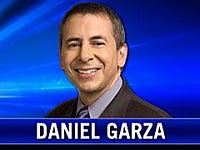 Award-winning reporter Daniel Garza is among a number of employees who were laid-off the Bay Area’s NBC station.

Danny, a Bay Area native, has worked 18 years at KNTV. He also worked in Puerto Rico as a desk editor for the Associated Press Caribbean bureau in San Juan, and associate editor for Caribbean Business newspaper.

Shoptalk is reporting the staffers were given generous severance packages. There is also word that more cuts are yet to come.