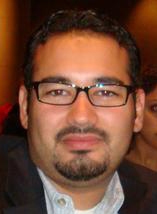 Sports reporter Jaime Cárdenas, recently laid off from the L.A. Times, has landed a job at the L.A. Galaxy as communications coordinator.

Jaime was looking to continue on in the news world. He was at UNITY in July and interviewed, but as he says “I don’t think anything was going to develop fast enough.” On the other hand, he admits: “I wanted a break and wanted to try something else. So I threw myself a curveball and decided to go into PR…. I’m excited, but I’m a little bit worried about the transition as well.”