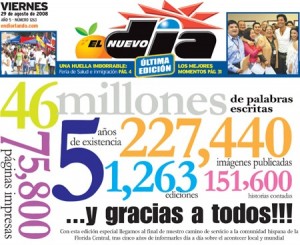 This is the front page of today’s El Nuevo Día – the final edition of Orlando’s only Spanish-language daily. (I cropped the bottom fourth which had an ad.)

The paper shuts down just shy of its 5-year anniversary.

A slumping economy was blamed for the decision, which cost 50 employees their jobs.