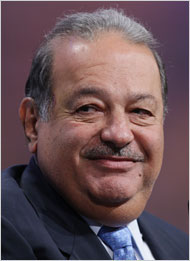 Considered to be the wealthiest man in the world, Mexican billionaire Carlos Slim has disclosed he and his family have bought 9.1 million shares of the New York Times Company – an equivalent of 6.4% of the company, worth $127 million.

According to the NYT, Carlos Slim has a history of buying “depressed assets he can later sell at a profit.” Analysts familiar with his investments say they see that same goal in the purchase of the Times Company stock. Could this be a good sign for the NYT, which has seen its stock drop from more than $40 a share in 2005 to less than $14 this week?