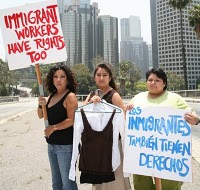 “Made in L.A.,” this week won the Emmy for outstanding continuing coverage of a news story – long form at the 29th annual news and documentary Emmy awards.

The 70 minute film, produced by Almudena Carracedo and Robert Bahar, follows the journey of 3 Latina immigrants working in L.A.’s garment sweatshops and their struggle in bringing a major clothing retailer to the negotiating table. The documentary had its national broadcast premiere on the PBS series P.O.V. in September of 2007.

It took the filmmakers 5 years to finish the the documentary, which was co-produced with Independent Television Service (ITVS) and P.O.V.’s Diverse Voices Project in conjunction with Latino Public Broadcasting. You can find more info about the film in the P.O.V. Web site.  Or, you can go directly to the filmmaker’s Web site.  Almudena recommends it, as it includes updates on their 2 yr-outreach campaign to engage local communities around local issues and it also includes a listing of upcoming screenings of the movie around the country.