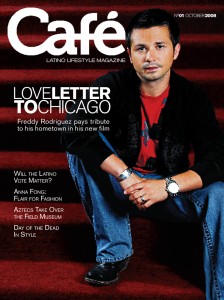 A new English-language Latino Lifestyle magazine hit the streets in Chicago.  The first issue – October/November 2008 will have a circulation of 45,000 copies.

The magazine is produced by a group of former Tribune employees, including Alejandro Riera, the Editor in Chief for Café Media.

“After working as a reporter and editor for Exito and Hoy for more than 15 years, I felt that the time was right to begin a new adventure,” says Alejandro.

According to its founders, Café “hopes to reach English dominant readers by providing original content grounded in their cultural values and interests.”