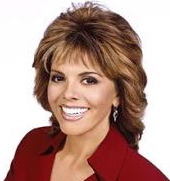 “Issues with Jane Velez-Mitchell” will air weekdays at 7 pm.  Jane was most recently a fill-in anchor for Nancy Grace and other CNN shows.  She previously reported for the syndicated show “Celebrity Justice.”  Before that, she spent more than a decade anchoring and reporting for KCAL-9 in Los Angeles.