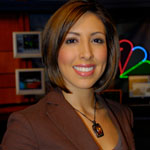 KTSM-9, the NBC affiliate in El Paso has decided to eliminate its noon news show. Melanie Olivas was the anchor of the show. No word yet on what will happen to her, but according to Gary Sotir, the station’s GM:”It is in no way a budget cut and no one is losing a job because of this decision.”

According to the Newspaper Tree, 2 news photogs did get laid-off from the station.

Melanie started at KTSM as a reporter in May of 2006. She was promoted to anchor of the morning show in October of 2007.