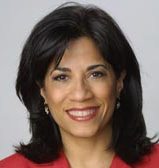 WKYC-3, the NBC affiliate in Cleveland, has laid off weekend anchor/reporter Lydia Esparra, as well as several other reporters.