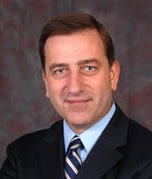 A chance encounter has placed veteran correspondent Pablo Gato in a new career path. He is now the general manager of the newly formed CONCIBAN, a financial consulting firm, which officially launches on January 16th.

Pablo was laid off from Telemundo network at the end of May of last year. After a vacation break, he founded Gato Communications. Prior to leaving Telemundo, he attended a dinner where he met the president of the Spanish bank Caja Navarra, which ended up being a client of his communications company. Eventually, he was offered the opportunity to build the CONCIBAN consulting firm. In addition to providing financial consulting, Pablo tells me the company’s objective is to bring the concept of a bank with social responsibility to the United States and other Latin American countries.

“CONCIBAN basically helps companies replicate the model in other parts of the world. We go to other banks and explain how the Banca Cívica model works, which has been in practice at Caja Navarra for the past 5 years.” That model consists of the bank donating 30% of its profits to social causes. Clients decide who they want the money to go to. They are also surveyed on a yearly basis and are asked to rate bank employees. If they get low scores, they don’t get bonuses.

Pablo says he wouldn’t have joined the firm if he didn’t believe in the concept. “What’s incredible about this company is that it’s totally transparent and it has become hugely popular because it’s truly reinvesting in the community. People could really benefit from this here. That’s why it is a priority to bring the model as soon as possible to the U.S.”