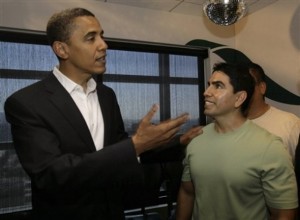 Barack Obama kept his promise to come back on the air on Piolín’s morning show when he became president. Last Tuesday he did a phone one-on-one Q&A with the popular Spanish-language radio DJ where he talked about the economic stimulus bill and tackled the issue of immigration.

During the interview, Piolín pointed out that Hispanics have made positive contributions to the country and told the president: “We need your help.” Obama admitted the immigration system is broken and emphasized he was “very comitted” to comprehensive immigration reform.

Obama went on the air on Piolín’s show several times during his presidential campaign.