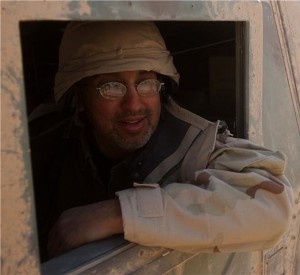 Ray Quintanilla, who was laid off from the Chicago Tribune last August, is now communications director for the SEIU Illinois Council.

Ray, who covered the Iraq war for the Tribune, spent 14 years of his journalism career at the paper. He tells me: “that part of my life is over. I am completely at peace with it.”

Ray says he has met many newspaper reporters who are still having a difficult time coping with leaving the industry and are still looking for their “dream” newspaper job. He tries to give them a somber perspective to the current reality of the business by sharing the story of a soldier he interviewed in 2003, later killed in combat.

“When I asked him what he was going to do when he got home, he said something like this: “I’m going to surround myself with friends and family more often; and stop being so hard on myself. I’ll see where that takes me.”