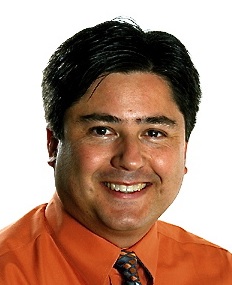 After 17 years at the San Jose Mercury News, reporter Edwin García is leaving the paper for a media relations job at Kaiser Permanente.

“I’m sad to be leaving journalism after nearly 20 years – and it pains me to see all the talented colleagues that continue to flee from this sick industry,” Edwin tells me. “I’m also excited to use my skills in a new career, where I can fulfill my thirst for learning and hopefully feed my family with a more secure paycheck and stable job.”

Edwin resigned last week from the paper but will stay on until May 1. He starts the new gig as a media relations specialist for Kaiser Permanente on May 4. He says he wasn’t looking for a job, but when a former Merc colleague called him up and asked if he would be interested in exploring the position, he sent his résumé. Shortly after, the newspaper announced furloughs, a proposed 15% pay cut and Edwin’s second baby was born. So, when he got the offer, he accepted.

Edwin has been at the Mercury news for the past 17 years, where he has won a series of awards for reporting. For the last three years he has been covering state government and politics in Sacramento. Before that, he spent 8 years on the paper’s race and demographics team, writing stories about the changing cultural landscape of Silicon Valley. He also was a columnist for the Merc’s Spanish-language weekly Nuevo Mundo, before it ceased publication. He previously worked as a reporter at the San Mateo Times and the Stockton Record, and spent a year as a private investigator.

“I’m not sure what this next career is going to be like,” says Edwin. “But already it seems more stable than where this last one’s going. Qué tristeza.”