Vicente Serrano, anchor at Telemundo’s Chicago station, recently finished a documentary about the deportation of legal immigrants during the Great Depression.

“A Forgotten Injustice” debuts tomorrow, Saturday, as an official selection of the 2009 Chicago Latino Film Festival. The film, more than 5 years int he making, includes personal accounts of survivors, historians and politicians like Hilda Solis, U.S. Secretary of Labor. 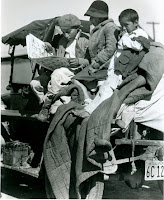 What prompted him to do this film? Doña Concha, his grandmother. Vicente tells me that although his grandmother was born and raised in Los Angeles, she was one of many Mexicans deported from the U.S. in the late 1920’s. Initially, he was going to write a book about her story.

“When I started doing my research to write the non-fiction book I realized this was not the exclusive story of “La Gringa” I knew, as I wanted to title the book, but rather the story of many gringos of Mexican descent that were illegally deported from the U.S during the Great Depression. The research took me, by itself, like three to four years because I did it on my own during my days off, my vacation time or early in the morning or late at night after my shift at the TV station,” Vicente says.

Vicente pitched the story to a few of his colleagues. Photographer Casey Mitchell, editor Maria Morales-Salazar and reporter Sandra Torres who came on board to help him produce the documentary.

“A Forgotten Injustice is the first documentary ever about the unconstitutional deportation of almost 2 million U.S citizens and legal residents during the 1930s when many government officials and local organizations considered that Mexicans, regardless of their legal status, were taking jobs and public help from “real Americans”.

My grandma and her family were corced to leave during that campaign that lasted more than 10 years to get rid of Mexicans. Now that the immigration debate is dividing our country and we are told that the economic crisis we are suffering is the worst since the Great Depression, I felt the responsibility to tell the story of my grandmother and the other more than one million men and women that were kicked our of this country for a very single reason: They were of Mexican descent.”

You can check out the trailer here.

On a related note, State Sen. Gil Cedillo authored and tried to pass a bill last year that would require public junior high and high schools to teach students about the deportation of about 2 million Latinos, including 400,000 Californians, to Mexico during the Great Depression. Many of them were believed to be U.S. citizens or legal immigrants.