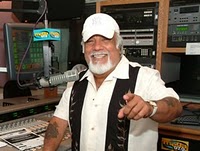 Polito Vega will be honored this weekend with a 2-day concert series for working 50 years in New York City radio.

Known as the “king of radio,” Polito left Puerto Rico to try his luck in NYC in 1957. Two years later, he landed a job at the now defunct WEVD-AM. The 71 yr-old DJ has been working for the Spanish Broadcasting System (SBS) for the past 20 years. His popular radio show “Salsa con Plito” airs Saturdays and Sundays from 12 to 8 pm on Mega 97.9.

The first star-studded concert will be this Friday at the Madison Square Garden, with an incredible lineup of guests like Juanes, Alejandro Sanz and Laura Pausini. It’s followed by a salsa concert on Saturday, featuring some of the best performers in that genre, including his personal fave, Gilberto Santa Rosa.