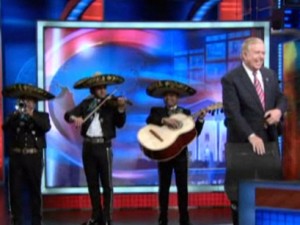 Lou Dobbs is really making the rounds. He was on Fox with O’Reilly on Monday. Comedian Jon Stewart welcomed him with a Mariachi band on “The Daily Show” last night and tomorrow, the anti-illegal immigration critic is sitting down with María Celeste Arrarás on “Al Rojo Vivo.” It’s supposed to be the first time the former CNN anchor speaks on Spanish-language TV.

Will he speak some español? The one-on-one is scheduled to air during ARV at 5 pm EST.