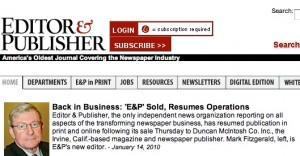 Two weeks after its official closing, Editor and Publisher resumes publication in print and online. The Nielsen owned property was sold yesterday to Irvine, Calif.-based publisher Duncan McIntosh Co., Inc. Terms of the deal were not disclosed.

In a story published in E&P, the new owners announced plans to publish a February print issue. Online reporting began immediately after the transaction was completed yesterday. The owner says he could not envision the newspaper industry without this “critical information source.”