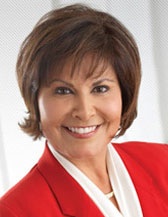 WFAA anchorwoman Gloria Campos and NewsHour’s senior correspondent Ray Suarez will be inducted to the National Association of Hispanic Journalist’s Hall of Fame on June 26th. The event will take place during the organization’s annual convention, to be held this year in Denver.

Gloria joined WFAA in 1984, becoming Dallas’ first Latino anchor. An award-winning journalist, who began her career at KGBT-TV in her hometown of Harlingen, Texas, Gloria is also the host and co-producer of “Wednesday’s Child.” The weekly segment aims to help find permanent homes for foster children. 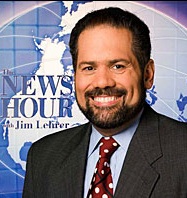 Ray has been with PBS’s “The NewsHour” since 1999, previously hosting NPR’s “Talk of the Nation” for 6 years. Ray has more than 35 years in the news business. He is also the author of several books. His most recent work is “The Holy Vote: The Politics of Faith in America,” which examines the relationship between relition and politics in the U.S.

The NAHJ Hall of Fame was created in 2000. With Gloria and Ray, there are now 27 Hall of Famers.